Last week, we outlined some of the technical advances included with the newest wireless standard, Wi-Fi 6 (also known as 802.11ax), including OFDMA, BSS Coloring, and MU-MIMO. Wi-Fi 6 truly incorporates some impressive technology that makes it a game-changer for the entire tech industry.

For those who are less technically inclined than the engineers who have made Wi-Fi 6 a reality, this alphabet soup of acronyms belies some of the benefits of the new standard. The truth is that the move to Wi-Fi 6 will be far more meaningful than any previous Wi-Fi standard, because it comes at a pivotal time for the industry. We’re on the verge of some incredible technological innovation over the next decade, from autonomous vehicles to VR hitting the mainstream, and the advancements that come with Wi-Fi 6 will help make these things possible.

Here are the main benefits that will come with the new generation of Wi-Fi. 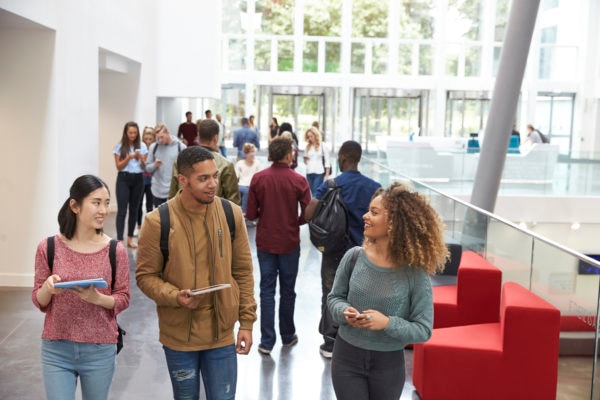 Unless you’ve been under a rock for the last decade, you’ve undoubtedly observed — and probably been a part of — the growth of smartphone usage in every public space imaginable. Nowadays, it’s impossible to go to a stadium, concert, university campus, park, or music festival without seeing crowds of people all trying to use their phones.

Local governments, college campuses, and event venues have all been involved in wiring these spaces for wireless coverage, to the point where “Free Public Wi-Fi” signs abound. The crush of hundreds or thousands of users puts a huge strain on these Wi-Fi networks, which often aren’t equipped to handle so many users, overlapping wireless signals, and data-hungry applications. This can result in a subpar wireless experience.

Fortunately, one of the key benefits of the new Wi-Fi 6 standard is dramatically better high density performance. Wi-Fi 6 access points use a variety of technologies to prevent interference between devices and transmit packets more efficiently. The result: more resilient networks that continue to deliver fast speeds even as more devices connect to the network.

Wi-Fi 6 will not only help deliver more consistent performance across a large number of devices, but also faster speeds to every device. Higher throughputs will unlock a new set of software and services, like augmented reality and complex SaaS apps, in the same way that previous Wi-Fi standards made things like wireless music streaming and cloud productivity apps possible.

The time is nigh for these throughput improvements. The total amount of internet traffic from 2017-2022 will be higher than in the previous 32 years of the internet, and from 2017 to 2022, bandwidth-intensive 4K video is expected to grow from 3% to 22% percent of all IP traffic. Video isn’t even half of it, though. According to estimates by the Organization for Economic Cooperation and Development (OECD), the average household with two teenagers will own around 50 Internet-connected devices by 2022, including many IoT (Internet of Things) devices, from sensors to smart home devices.

Another reason the faster throughputs in the Wi-Fi 6 standard matter is because Wi-Fi 6 is hitting the market around the same time as 5G. Customers will expect Wi-Fi networks to deliver speeds at least as fast, if not faster, than the cellular network, and 5G networks will be offloading significant amounts of traffic to Wi-Fi. Cisco plans to take advantage of the next wave of wireless by introducing a new technology called OpenRoaming, which makes it easier for people to transition between different networks without the pain of logging onto each one individually. OpenRoaming aims to link together service providers, device manufacturers, and network operators to create greater interoperability between networks. With OpenRoaming in place, consumers will be able to seamlessly roam between 5G and Wi-Fi 6 networks without having to deal with the many annoying interruptions in service they encounter today.

Though the devices we carry around everyday have experienced startling improvements in myriad ways — faster processors, larger screens, incredible cameras — battery technology hasn’t advanced much in the last few years. Consumers still hanker for the days when their phones could last for a week without a charge, instead of petering out in the middle of the day. (Most consumers also wish their phones didn’t shatter when dropped, though that’s beyond the scope of this blog post!)

It won’t be long before Wi-Fi 6 APs and devices are everywhere — Wi-Fi 6 devices are expected to be more than half of the devices sold in 2020. At Cisco Meraki, we couldn’t be more excited about the wave of new benefits that come with this new wireless standard. As Wi-Fi 6 becomes the new normal, consumers will have a significantly better experience connecting to wireless networks.